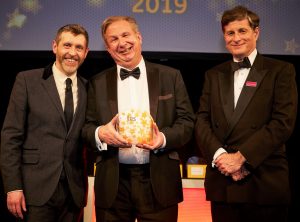 In his 18 years at the helm of Weston College, Paul Phillips has directed a dramatic turnaround in its fortunes. The judges commended Phillips for the proven impact of his leadership which has been sustained over time. Turnover at the college has increased from £9 million when he joined in 2001 to more than £63 million in 2016–17 – making it one of the 10 biggest colleges in England.

When he moved to the Somerset coastal resort to take up the job, Phillips took up a room in a bed and breakfast over the road so her could be as close to the institution as possible. Last year, the college was awarded a Queen’s Anniversary Prize for its inclusive practice for pupils with special educational needs or disabilities (SEND). The college was also the first to open a specialist autism residential training facility. Under Phillips’ leadership, the college has had a major impact on the seaside town it serves, including restoring the 1920s Winter Gardens Pavilion and its ballroom for community use, while building a new Law and Professional Services Academy. In 2016, the University Centre Weston opened; a year later it was awarded a Teaching Excellence Framework (TEF) gold award.

Phillips has also committed to sharing best practice across the sector and has helped other colleges with everything from strategic planning to recovery plans and health and safety reviews. In 2017, he was made one of the first National Leaders in Further Education. The judges said: “Dr Phillips gets results and has been truly transformative in the area.”

This award was sponsored by the Education and Training Foundation.