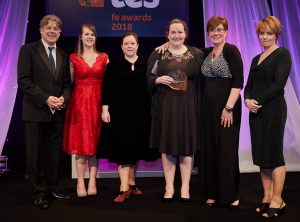 This was the first time that the winners of the five institutional categories – FE college, training provider, sixth-form college, as well as the inaugural specialist provider and adult and community learning provider awards – have gone head-to-head for the right to be named overall provider of the year.

And the judging panel was unanimous in its decision that it was Foxes Academy – the first specialist provider of the year – which should also claim the flagship title.

Foxes Academy, based in Somerset, is an independent specialist college and training hotel for young adults with learning disabilities. Helping these learners into sustained employment is a difficult job: according to the British Association for Supported Employment, the proportion of people in England who have learning disabilities and are in paid employment fell from 7.1 per cent in 2012 to just 6 per cent in 2015.

For the learners at Foxes, the employment rate has consistently been over 85 per cent, year after year, with a sustained employment rate of 77 per cent since 2015 – figures that many general FE colleges, let alone specialist providers, would be envious of.

Foxes Academy aims to equip learners with the skills, knowledge and confidence to successfully shape their own futures. The judges said that the provider’s engagement with local employers was exceptional, offering real pathways for their learners, as were its 100 per cent pass rates in all formal examinations and assessments in 2016-17.

The judges added: “Foxes particularly stood out for its strong mission and vision, innovative working and the strength of the learner voice.”

This award was sponsored by the Education and Training Foundation and presented by the CEO, David Russell.