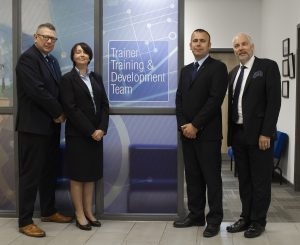 The Babcock Training and Trainer Development Team (T2D) has been coordinating a project using the Education and Training Foundation’s Professional Standards to raise standards with more than 200 trainers working at MOD Lyneham in Wiltshire.

The T2D team, through Continuing Professional Development (CPD) activities and developmental lesson observation, is responsible for inspiring and improving the quality of training that takes place to ensure the maximum benefit for learners.

The team is made up of four trainers: Ian Bailey, Sarah Jenkins, Andrew Cooper and Mark Fuller, who have a variety of military and civilian training backgrounds. Babcock trainers at MOD Lyneham work as part of the Defence School of Electronic and Mechanical Engineering (DSEME) contract and provide academic and technical training for the Royal Electrical and Mechanical Engineers (REME).

Many of the trainers employed by Babcock at Lyneham are dual professionals and recruited primarily as subject matter experts from their trade backgrounds. The T2D team is responsible for developing them as effective and efficient trainers.

Exposing trainers to the wider world of teaching and training

“The project started after a visit to the World of Learning Conference in October 2017,” said Mark Fuller, a member of the T2D team. “We thought it was important to expose our trainers to the wider world of teaching and training. On our return we held an informal meeting and there was a real demand to continue this type of opportunity.”

After initial discussions, membership of the Society for Education and Training (SET) was encouraged and from this the idea of creating a Professional Standards CPD tool using a Virtual Learning Environment (VLE) for trainers.

More than 40 trainers volunteered to take part in various activities – the first of these was a survey around the Professional Standards to benchmark where the team was as an organisation. It soon became apparent that many trainers felt they met the standards but would struggle to evidence this or would welcome further training on the standards.

The T2D team collated the responses and suggested that trainers form Professional Standards Groups (PSGs) and each PSG was allocated a standard to work on. The aim was to develop a resource (learning poster, identify a piece of research, website, video and so on) that could be loaded onto the VLE to create a ‘one-stop shop’ for trainers who wanted to develop their understanding of the relevant Professional Standard.

Throughout the development phase the T2D team organised a number of ‘sharing seminars’ where staff could share what they were working on and seek advice and guidance from their peers.

To support the concept of ‘looking outside’ of the DSEME environment, a visit was organised to the BETT show for all trainers, as well as the T2D team visiting a secondary school to challenge their views of how CPD can be used to improve outcomes for learners.

“We also arranged some external visitors, such as the Chief Executive of a local Multi-Academy Trust, to visit us and look critically and challenge is about what we offer in terms of CPD and the use of Professional Standards,” said Ian Bailey, a member of the T2D team.

Showcasing the project to different audiences

By April 2018 the project was completed and a Professional Standards page was created on the VLE for trainers to use in their own time. The project was initially launched at a ‘Trainer Forum’ in May 2018 and showcased to a number of audiences from both the Defence and wider training world, including the Association of Colleges (AoC).

The use of the Professional Standards by all trainers is planned to be launched formally at the start of the new academic year in September 2018. The T2D team has also taken on the provision of the L4 Certificate in Education (CET) and Training to new Babcock trainers to further ensure the quality of training improves.

There have been a number of outcomes from the project in addition to the VLE site, which include:

Trainers have been positive about the project and its outcomes so far:

“The descriptors have been useful in allowing me to make some judgements about where I am in relation to the standards. I have used these to help me set some targets for my own professional development.”

“I am new to the training world and the VLE site has really helped me get to grips with the Professional Standards and what they mean in the classroom.”

“Spending some time producing content for the VLE has been great in allowing me to reflect on the fact I do a really good job, but there is room for improvement.”

“Being able to pop down with a cup of coffee and browse the resources has been a good use of time. It’s great that there are physical and online resources.”