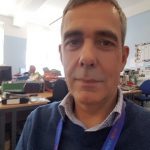 Rob Long is a lecturer in Engineering at Southport College. He has worked in engineering for over 40 years.

Why did you choose to teach in Further Education and work with the SET for Teaching Success programme?

I left school at 16 and as a Mechanical Engineering Apprentice I studied an ONC and HND in Mechanical Engineering with the aspiration of becoming a Design Engineer. I put just enough effort into my studies to enable a pass and no more. In my early thirties I was made redundant during an engineering recession. I was then out of work for two years and I decided to study for a part time degree. I paid the fees myself and worked as a labourer on a building site. In the second year of my degree I discovered a hidden motivation and began to achieve merits and distinctions for coursework. Having eventually achieved a First, I then progressed to study for a PhD at Imperial College (IC) London. After I completed the PhD I conducted research at IC for over 12 years into using ultrasound to inspect structures. I was then made redundant and moved to the North West where my last engineering job was consulting on the routine inspection of nuclear power stations.

When I moved to the North West I began tutoring disadvantaged school children on a volunteer basis and this kindled the idea that I would like to be a teacher. Many of the youngsters I tutored had the intellectual wherewithal to succeed in school, but they seemed bent on bypassing homework and assignments in favour of more interesting pastimes, such as computer games.

From my own experience as an underachiever and someone who has seized the day, I thought that maybe I could help young adults to overcome the same experiences.

What do you like about teaching in Further Education?

I chose to work in Further Education, rather than schools, as this gives me an opportunity to share my life and engineering experience with those about to enter the workplace.

What have been the benefits so far from the SET for Teaching Success Programme?

The SET Programme offers support to early career lecturers in Engineering that has proved invaluable.

What do you see yourself doing in the future?

I plan to commit to being a college lecturer. I had thought that after my teacher training I would move on to become a university lecturer. Surely the students would be better behaved and motivated? However, now I’m coming towards the end of my first year, I now find I am experiencing much more satisfaction seeing students that have progressed beyond the stories that they had about themselves.

Interested in the SET for Teaching Success programme? Find out more.