Why do people adopt conspiracy theories?

In the third of a series of blogs around the theme of safeguarding, ETF Associate Selina Stewart asks why conspiracy theories are attractive.

The first blog in the series, which considered why extremism is even more of a risk in the time of a pandemic, can be read here. The second, which asked why we should worry about conspiracy theories, can be read here.

Throughout my teaching career in colleges a minority of students would enlighten me with one or another conspiracy theory. In the 1990s it was claims that the Masons control the world, and later that the CIA or Mossad attacked the Twin Towers on 9/11, and increasingly Holocaust denial.

In my History classes we spent a lot of time looking at the reasons why historical events occur. This might be why the USSR fought in Afghanistan or why the USA fought in Korea or Vietnam. It is important to understand why states act as they do and to be aware of the conflicting interpretations about historical events.

Some students saw conspiracy theories as explanations which gave an even deeper insight. However, what they failed to recognise was the key characteristics of conspiracy theories which are tied to the idea of a secret global elite that has a grand plan for the world, often combined with the scapegoating of vulnerable communities.

So why were my students, in particular young men, attracted to conspiracy theories? Fundamentally, they wanted a simple explanation for world events and often found the messiness of life and historical events difficult to accept.

Each year I would ask Professor Scott Lucas from the Department of American and Canadian Studies at Birmingham University to talk to them about the Cold War. He had worked in the Pentagon early in his career; he was a ‘real American’. They were always very interested and each year at least one student would ask him to confirm that it was the Masons who were making the ‘real’ decisions. He told them that life was far more complicated than that; often it was a question of the people in power making poor decisions because they were in a bubble and didn’t understand people outside their bubble. Some were convinced, others believed he was deluding himself and it was really the Masons who were in charge!

It is clear that there is fertile ground for the adoption of conspiracy theories in the UK, not just in my History classes. Conspiracy theories make order out of chaos and confusion, so the more frightening or confused the world seems, as now in the age of Covid-19, the more appealing conspiracies are.

A psychological analysis of those who believe in conspiracy theories identifies a range of personal outlooks, needs and desires, as can be seen in this chart: 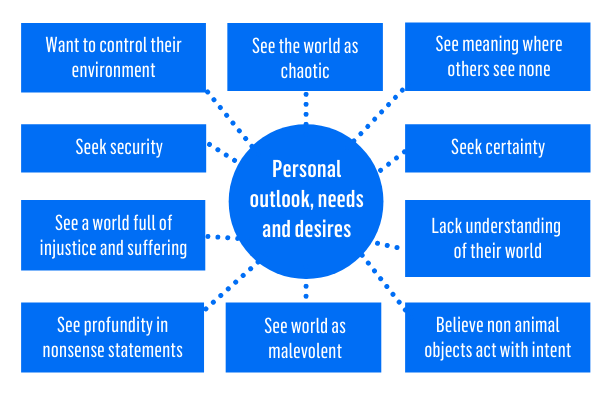 (From Coronavirus: vaccine misinformation and the role of social media and Current Directions in Psychological Science)

We may or may not be able to identify these in our learners, but one clear message comes out of research into conspiracy theories; they do not give comfort.

“A feature of conspiracy theories is their negative, distrustful representation of other people and groups. Thus, it is plausible that they are not only a symptom but also a cause of the feelings of alienation and anomie – a feeling of personal unrest and lack of understanding of the social world.”

(From: Current Directions in Psychological Science)

An important consequence of believing conspiracy theories is not just that it reduces trust in government and institutions, but it actually stops people seeing themselves as valued members of society. The belief that they and other ‘ordinary’ people can have no impact on politics, society or their own lives. This makes people vulnerable to being groomed by extremists.

A key concern in the UK is the decline in trust in the news from mainstream sources which encourages people to believe conspiracy theories from unreliable ones. Data from the Reuters Institute in 2019 stated that only 28% of those surveyed trusted the news most of the time. This had reduced by over 20% since 2015. This was lower than other comparable countries.

Research in the US has shown that people who believe conspiracy theories tend to have the following characteristics:

This is where we as teachers and trainers can support learners by preparing them for meaningful and decently-paid employment. We can give them the skills to take control of their own lives and we can work with them to develop critical thinking skills. There is then a good chance they will feel they have more stability, control more of their own destiny and can avoid being taken in by conspiracy theories.

And there is positive news! Recent data shows that a belief in conspiracy theories need not be permanent.

In August 2020 King’s College and Ipsos Mori polling suggested that only 53% of British people aged 16–75 would get the Covid-19 vaccine and 16% said they definitely would not get it.

Furthermore, research carried out by the two organisations at the end of November 2020 identified that:

However in January 2021 Ipsos Mori carried our further polling which showed that 86% would have the Covid-19 vaccination “if it was available”.

This suggests that conspiracy theories need not dominate the public discourse and that attitudes can be changed. This is despite one in three people in the UK saying in the November research that they had seen antivaxxer messages.

This should give hope to educators; it is possible to have an impact on people attracted to conspiracy theories. What doesn’t work is to tell learners that government or institutions are always right, but we do need to support individuals in making judgements about what they read. We can give people the skills to think critically and analyse what they are told or what they read.

The Education and Training Foundation is running a series of forums and webinars for staff across FE and Training who lead on safeguarding, including a webinar on digital safety and remote learning on 25 March. For details of these events, please visit the Prevent Forums and Webinars page on the ETF website.